Manufacturing in Mexico vs China

Choosing Between Mexico vs China for Manufacturing

The manufacturing industry has been growing exponentially, therefore, lately, companies within this sector seek to move or expand their production to other locations, looking for a more cost-effective location, taking into account, among others: labor costs, supplier network, logistics. In order to find the location that best supports their growth strategy. Let’s compare the manufacturing in Mexico vs China.

China and Mexico are considered low-cost manufacturing countries, therefore they are most of the time considered as an option for nearshoring or offshoring. So which country could be the best option for your company to settle in?

In this document, we will focus highly on the best option for US manufacturing companies.  According to a PwC study, currently, US manufacturers have been considering transferring their production to Mexico, moving it from China, as they can reduce operating costs, on average, by an additional 23% (PWC, 2020).

According to this same study, PWC taking into account the operating cost of a hypothetical product, estimated producing it in China was 27% less expensive than producing in the US, and as in Mexico logistics and tariff and fees costs are much lower companies could save the additional 23% before mentioned.

Main factors that could impact the operating costs in manufacturing in Mexico vs China.

Within the most important factors taken into account when performing analysis for expansion of operations is the labor cost. One of the main competitive advantages of Mexico and China is their low labor cost. Which according to Statista the average manufacturing labor cost per hour in China is 6.5 USD per hour with an increase of 13% from the previous year. While in Mexico it is 4.82 USD per hour, with an increase of only 4% from 2019 (Statista, 2020). Which shows a trend of a higher increase in wages in China compared to Mexico.

The above mentioned year per year increase has also been impacted by the MXN – USD exchange rate, the devaluation of the MXN peso against the USD in the last years have reduced the effective labor rate inflation.

It is important to take into account that the manufacturing labor costs for both countries are just an average as a means of providing insight, as labor costs will vary per region, workforce skills, and level requirements, among others.

Lastly, Mexico is considered to have greater productivity with 48 hours work week compared to a generally 40-hour workweek, in which after this overtime must be paid.

Mexico vs China: Tariffs and taxes

Due to the US-China trade war, the US has imposed tariffs on more than $360 billion of Chinese goods. Although this year a tariff agreement was signed, and the U.S. agreed to lower tariffs on $120 billion of Chinese goods to 7.5%, tariffs are still higher than in Mexico, and it is also important to take into account that some of the most challenging issues weren’t solved.

On the other side, the United States- Mexico- Canada Agreement (USMCA), allows goods to be exported and imported between the US and Mexico free of tariffs under specific conditions.

Furthermore, Mexico counts with foreign trade incentive programs such as IMMEX, VAT and IEPS Certification, PROSEC, Rule 8th. One of the most common is the IMMEX Program which is an instrument that allows the temporary import of goods that are used in an industrial process or service, to produce, transform or repair foreign goods imported temporarily for subsequent export, without paying VAT and countervailing duties, and deferring or not paying General Import Tax. 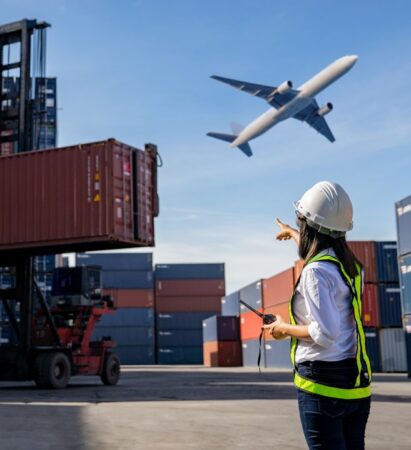 One of the most known competitive advantages is Mexico’s favorable geographic location, due to its proximity to the United States and its access to the Atlantic and Pacific. In regard to goods being shipped to the United States, according to Mexico Business, Mexico counts with an 80% logistics time advantage due to its proximity to the U.S., and 75% logistics cost advantage over China. Thus making Mexico a better option when deciding manufacturing in Mexico vs China.

All the mentioned factors affect the supply chain cost structure. Therefore, it is important to take into account when analyzing supply chain sourcing. According to the before-mentioned PwC study, through an analysis taking into account labor content and Product Value density, based on $450 billion of manufactured goods imported from China to the US in 2019, 20% of those goods could achieve cost efficiencies if nearshore to Mexico (18%). (PWC, 2020).

As a summary from the above-mentioned discussed factors, pleased find below a comparison table of manufacturing in Mexico vs China: 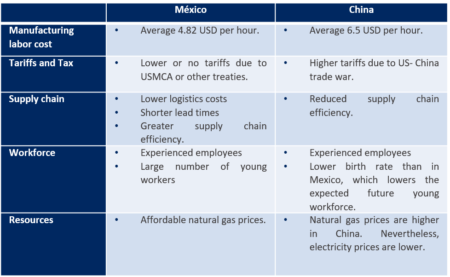 Are you thinking of moving or installing your manufacturing to Mexico?

Mexcentrix offers high-value, cost-effective and flexible shelter services and outsourcing that will get your operation in Mexico highly functional at a lower cost and successfully producing within a shorter timeframe than you can achieve on your own—all while significantly reducing the risks associated with a start-up. Contact Mexcentrix for a feasibility study or cost estimation today!