Mexico regains status as No. 1 US trade partner

Mexico is again the top trading partner of the United States, with two-way trade totaling $48.47 billion in February, according to data from the U.S. Census Bureau.

China had been the top U.S. trade partner for 10 consecutive months beginning last May.

In February, the nation’s top trade partners were:

The U.S. exported $21 billion in goods to Mexico during February, and imported $27.47 billion from Mexico during the same period.

According to census bureau data analyzed by WorldCity Inc., the top three exports in February from the U.S. to Mexico were liquefied natural gas ($3.4 billion), gasoline ($1.58 billion) and motor vehicle parts ($1.08 billion).

The top trade ports along the U.S.-Mexico border during February were:

The Ysleta port of entry is near El Paso. Officials recently began diverting some commercial traffic from bridges in El Paso to Ysleta to reduce congestion in the area and to serve as a new route for commercial freight vehicles crossing to and from Mexico.

Troy Ryley, president of Redwood Mexico for Redwood Logistics, told FreightWaves that “cross-border disruptions prevalent in 2020 have certainly carried over into 2021 and could escalate in the short-term.”

“Mexico shipping continues to face equipment shortage and longer border crossing times heading into the second quarter,” Ryley said. “As the first quarter of 2021 comes to an end, we are bracing ourselves for one of the most challenging spring seasons in the transportation industry yet.”

Laredo’s headhaul index (HAUL.LRD) has risen 72% since April 4, indicating a tightening in trucking capacity, according to FreightWaves SONAR platform. 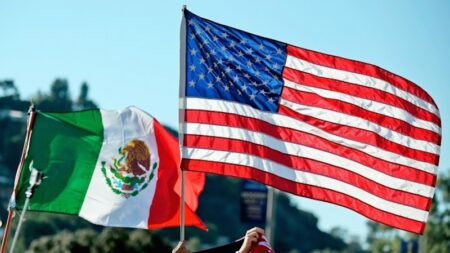