Home / Blog / Blog / Overview of the Automotive Industry in Mexico

Overview of the Automotive Industry in Mexico

The automotive industry in Mexico began in 1921, with the arrival of the first Buick assembly plant; continuing with Ford Motor Company in 1925 and General Motors in 1935. The industry has grown exponentially, both in sales, export and production of vehicles and auto parts.

Nowadays the automotive industry is a key sector for the Mexican economy; it represents 3% of Mexico´s GDP and a 16% participation of the manufacturing GDP. It is currently the 7th world producer of light vehicles, the 3rd largest exporter of vehicles, and 4th largest exporter of automotive parts; the main destination countries USA, Canada, and Germany.

Mexico is one of the main countries with the highest investment in this sector. Unlike other countries with CKD production (Vehicles completely assembled from components supplied by another plant), production in Mexico is 99% CBU (completely built up) that means, finished products ready to sell in the domestic market or for export without the need to require assembly after finished.

In Mexico there are 22 companies affiliated to the Mexican Association of Automotive Industry (AMIA), which had a total production of light vehicles from January to October 2020 according to of 2,465,439 vehicles. As it can be observed in the following graph General Motors, Nissan,  FCA Mexico and Volkswagen count with the highest production. 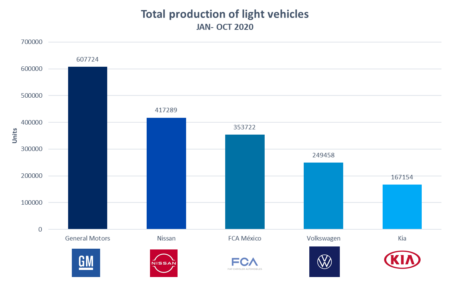 It is important to mention that 2020 mainly due to its current situation of COVID-19, has recorded a lower vehicle production compared to 2019, year in which there was a production from January to October of 3,288,589. According to Deloitte, in April and May of 2020 the industry reported its lower level of production in history.  And according to Statista it has been projected that the production of light vehicles in Mexico will decrease by 23.7% in 2020.

Out of the total vehicles produce from January to October 2020, over 85% are exported, with a total of 2,119,022 light vehicles exported within this period. 80% of these exports were headed to United States, followed by Canada with 6% and Germany with 5.8% of total exports.

The main companies that led the above-mentioned exports are being General Motors, FCA México, Nissan and Volkswagen, as can be seen in the graph below. While the brands with the least export were premium brands such as BMW Group and Mercedes-Benz. The export of vehicles in Mexico represents 17% of total exports.

As above mentioned, due to the current pandemic situation Mexico´s automotive industry has been affected and production of vehicles and auto parts has decreased. According to Deloitte, with information from HIS Markit, it is  expected that the level of production in Mexico in 2019 and sales is reached again in 2024, due to its sales reduction in USA and other countries.

Are you thinking of settle in Mexico? Mexcentrix can help you. We assure you a successful and timely start of operations, while providing strategic guidance in order to help your company reach your goals.