The UK has signed a continuity trade deal with Mexico worth more than £5 billion to avoid tough tariffs on exports after Brexit, the government has announced.

International Trade Secretary Liz Truss said the agreement will allow the two countries to “take our trade to new heights” as it seeks to negotiate a further trade deal next year.

The UK-Mexico Trade Continuity Agreement is expected to benefit the automotive, pharmaceutical, textiles, agriculture, food and drink sectors, as well as other manufacturing industries.

The deal will keep tariffs on car and UK drinks exports at 0%, saving tens of millions of pounds in duties which would have been applied under World Trade Organisation terms.

The countries have also agreed to start negotiating a new free trade agreement next year which hopes to go further than the existing deal.

Ms Truss said: “This deal supports a trading relationship worth more than £5 billion and locks in access to each other’s markets.

“We look forward to working together with our Mexican friends and allies on a new and ambitious trade agreement in 2021. This will allow our two countries to go much further in areas such as data, digital trade, investment, intellectual property and services.

“This is also the seventh trade deal we’ve secured with a member of CPTPP, the grouping of 11 dynamic economies around the Pacific. So, it’s another really important stepping stone toward the UK joining CPTPP, and I look forward to making our application to do just that early next year.

“Together we’ll enjoy even more success by seizing this opportunity to take our trade to new heights. International trade will help us to overcome the challenges of coronavirus and drive economic growth across our United Kingdom.”

It comes as the UK continues post-Brexit trade talks with the European Union – with just over two weeks until the transition period ends.

It is unclear whether a deal will be struck as the clock runs down and crucial issues remain to be resolved.

Three topics are yet to be agreed on – governance, the ‘level playing field’ and fisheries.

It is understood concessions may be being made by both sides in a last-ditch attempt to come to a deal. 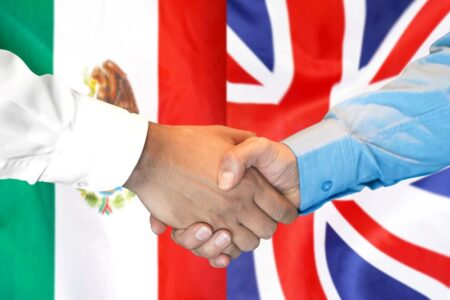