Home / Blog / Blog / WHY SHOULD YOUR COMPANY MOVE MANUFACTURING OPERATIONS TO MEXICO?

WHY SHOULD YOUR COMPANY MOVE MANUFACTURING OPERATIONS TO MEXICO?

For many years, Mexico has been considered as an attractive location to establish manufacturing operations due to the different advantages it offers for manufacturing companies, such as: 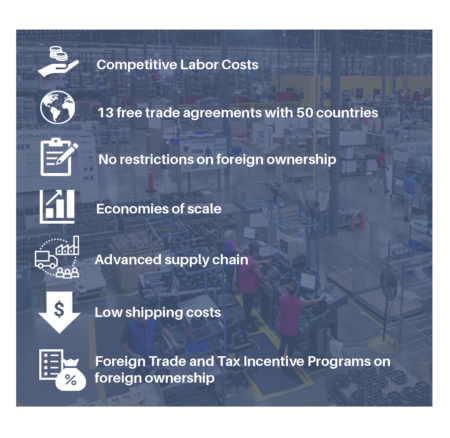 One of the main advantages driving companies to establish manufacturing operations in Mexico, is its competitive labor cost.

The chart below shows the average hourly fully burdened labor rates in USD for different direct labor positions  in Mexico. Please note that the above numbers are an average and can vary depending on the region/ state in which the company is established.

Up to date Mexico has signed over 13 free trade agreements with 46 countries, including one of the most important which is the USMCA (United States-Mexico-Canada Agreement) which allows foreign companies to import some raw materials and products free of duties. Additionally, this FTA’s provide Mexico with access to around 60% of the world’s GDP.

Additionally, compared to other countries, such as China, Mexico does not have any restriction on foreign ownership of manufacturing. And the government does not interfere directly with private companies. Furthermore, the government promotes foreign investment by providing incentives to foreign companies.

Mexico benefits of economies of scale due to its existing industrial clusters. It offers a wide number of customers and supplier options, as Mexico occupies:

In addition, due to the above-mentioned, Mexico counts with advanced manufacturing supply chains from various industries including automotive, aerospace, electro domestics, among other. Manufacturers can easily find in Mexico strong supply chains which support different activities such as plastic injection, stamping, machining, foundry among others.

As neighbor of one of the most important markets, United States, it offers important advantages such as streamlined logistics, cheaper shipping costs and  shorter overall times for shipping.

Mexico counts with diverse foreign trade incentive programs such as:

All of the above mentioned are some of the main reasons why Mexico has become a preferred destination for transnational manufacturing companies. Therefore, in Mexico you can find manufacturing facilities of some of the biggest companies worldwide. Within the automotive industry you can fine Volkswagen Group, BMW, GM, Toyota, Daimler, Ford Motors among others. In addition to Bombardier INC,  Safran, and EATON Corporation from the aerospace industry, among other big companies from various industries such as 3M, Becton Dickinson, GE, Jhonson & Jhonson and Plexus, among many others.

Is you business considering to move to Mexico? Mexcentrix can help you by facilitating the process through a smooth start and running of operations. Contact us!